You are here: Home - Case Studies - ROWL Recycles Tons of Plastic with a Baler on a Trailer

ROWL Recycles Tons of Plastic with a Baler on a Trailer

In Lewistown, Montana, a town of just 5,000 people, the community is gathering once a month and making a difference. Before Recycle Our Waste Lewistown (ROWL) was started nearly 3 years ago, there was no place locally for people to recycle their plastic. This was bothersome to Rosemary Kent, Chairperson of ROWL, who strongly believed in recycling after living overseas for a few years (see video interview with Rosemary, here). Eventually with the grant money received from the Episcopal Diocese of Montana, local business contributions, and various donations – a baler, trailer, and generator were purchased, and ROWL was created. Last year alone, ROWL and the Lewistown community baled and recycled over twelve and a half tons of plastic!

Recycling & Baling without a Building 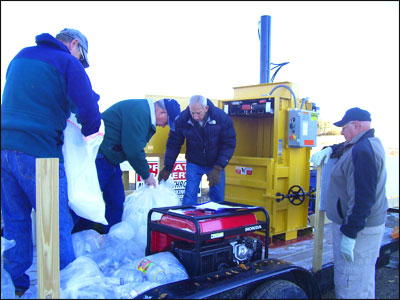 Roger Sicz is one of the many volunteers with ROWL. Roger has experience with recycling from when he was the Landfill Manager with the City of Bozeman, MT. What is unique about ROWL is that they currently do not have a building for their recycling and baling, other than a small 5×8 shed for storage of 30-40 bags of plastic during the month. They purchased the M30HD baler from Harmony Enterprises Inc. which is stationed on a trailer with a generator to power the baler. On the 3rd Saturday of every month, the people of Lewistown gather where the trailer and baler are parked at a huge grain mill lot, owned by one of the community members. The owner of the lot lets ROWL use the land each month, and even lets them store the trailer inside his building when it is not in use for no charge. The generator mounted on the trailer runs 220 volt power and only costs them about $12-14 a month in gas. Roger told us, “On the 3rd Saturday it is like a social hour when the community gathers to recycle their plastics. But people don’t have to get out of their car if they don’t want to. We will do it all for them.” ROWL is ran entirely by volunteers. Roger points out, “We have about 10-12 volunteers each month but we try to have them work less than 3 hours each day.” Volunteers do everything from handout plastic bags to collecting and sorting materials. Over the past two and half years the volunteers at ROWL have learned a lot and increased their effeciencies a long the way. For instance, they used to offload the bales on a dock, push them into a pickup, and then make several trips to Pacific Steel and Recycling to transport the bales. Now, they have a 16 foot trailer that they park parallel to the trailer with the baler. As the bales are made, they are loaded right onto the large trailer, and when the day is done the entire load is taken to Pacific Steel.

With the success they have had with the baling plastics with the M30HD vertical baler, ROWL is already projecting they will need a bigger baler to keep up with what the community wants to recycle. They are looking into the M42HD vertical baler, which has the same specifications as the M30HD but will produce a larger 42 inch bale instead of a 30 inch bale. Pacific Steel and Recycling has also agreed to let ROWL set up the new baler within their facility, so they no longer need to store the trailer/baler and transport the bales.

The Lewistown, Montana community and ROWL volunteers are making a big impact in their city and beyond! We would like to thank ROWL for letting us share their story with others who are trying to do the same.